In Bosnia Hercegovina, which has often been called the „European Orient“, one can find in many places a trail left by Czechs and particularly in Sarajevo. Mostly it’s by Czech architects but in the capital of this country in the heart of the Balkans we can also find works of a Czech photographer, radio editor or brewer.

On a walk through Sarajevo parts of the city will remind you of a central European metropolis or city. It doesn’t just seem so. Not only in Bosnia Hercegovina but also in other countries of the former Yugoslavia many Czech architects used to create of which some not only worked but also lived here.

The most significant of these architects is Karel Pařík. This Czech native, born in Jičin in 1857, came to Sarajevo at 26 years old, after the Austro-Hungarian occupation of Bosnia Hercegovina and was active into the 1980s, working here 60 years. This architect built about 150 buildings in Bosnia, 70 of them being in Sarajevo. Today they are important objects in Sarajevo such as: National Museum, National Theatre, Islamic faculty, synagogue, as well as house of government and schools. He fought for maintaining historical parts of the city and proposed construction of new parts of the city from Koševo to Sarajevsko Polje. Karel Pařík placed his personal stamp and made great contributions to the urbanization of Sarajevo during the Austro-Hungarian occupation.

The National Museum building is the most significant work of Karel Pařík in Sarajevo. The Museum was founded in 1885 and was open to the public on the 1st of March, 1888. The building is made up of 4 pavilions which are joined by a terrace and in the center is a well-maintained botanical garden. Work on the building lasted until 1913. The whole building of the National Museum was constructed in the spirit of the Neo-Renaissance and is doubtlessly the best of Karel Pařík’s works.

During the Austro-Hungarian condominium Sephardic and Ashkenazy communities existed. The Ashkenazy community came to Sarajevo after 1878 and began building a synagogue in 1901. The form of the temple is bejeweled with sharply angled domes over large „drums“ and covered with pseudo-Moresque decoration (which are to show their eastern origins). During the construction changes were made by Pařík, who is considered to be the author of the object and the actual building was finished in 1902. This is the only active synagogue in Bosnia Herzegovina today.

Karel Pařík was one of the most productive architects of his time. One of his most monumental works is the Evangelic Church. It is the only Evangelic church built during the Austro-Hungarian government, built in 1899 according to his designs in Romanic-byzantine style. The wings of the building were completed in 1911. Today this building serves as the Academy of Creative Arts.

In 1891, Pařík worked on another significant building project in the pseudo-Moresque style – The Municipal Hall. Pařík didn’t want to accept the request of Minister Benjamin Kalaj and therefore the proposal was rejected. The construction was turned over to Alexander Wittek who used the Mosque of Kemal II in Cairo as inspiration. After Wittek’s death the construction was completed under Čiril Iveković in 1896. The building was built in the style originally conceived by Pařík. During the period of Yugoslavia this building functioned as the National Library. In the civil war of the 1990s the building was destroyed and today reconstruction work continues.

Among Pařík’s first completed projects is the Sharia School. It was built in 1887 in a rich pseudo-Moresque decorative style with elements and details collected from various regional Islamic art schools. The Museum of the City of Sarajevo was opened in the building in 1949 which had archeological, historical, ethnographic and art collections. Today the building is used as the Faculty of Islamic Sciences. 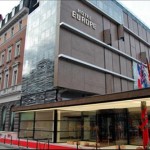 Karel Pařík also designed the first modern hotel, this being Hotel Evropa. It was built in 1882 by Gligorije Jeftanović and festively opened 12. 12. 1882. For 110 years this was the most specious hotel in Sarajevo, from its opening until its burning on 1. 8. 1992. Many poets, painters, and artists of all types and politician stayed in this hotel during the Empire, Kingdome of Yugoslavia and later in the time of the Socialist Federal Republic of Yugoslavia. Reconstruction of the hotel was complete and officially re-opened 12, 12, 2008 on its 126th birthday.

Another Czech who briefly but significantly affected Bosnia was Alfons Mucha. This painted received a commission in 1900 from the commissioner of the World Exhibition to decorate the Bosnia Herzegovina pavilion. Though it is not often mentioned Mucha was also an excellent photographer and took his camera with him to the Balkans and after collecting material began to paint a large decorative canvas. Mucha decided to use the concept to tell the history of the country beginning with primeval times, the Romans, the Slavs up to the arrival of various religions (Islam, Orthodox, Catholicism) including heresies. The main wall of the pavilion depicted an enthroned young woman, Bosnia, which offered the products of her country to the World Exhibition.

The impressive canvas was to reinforce the primary Habsburg idea of the Bosnia and Herzegovina Pavilion: which was a peaceful multi-faceted blossoming area which fell under Austria’s administration and the unproblematic co-existence of its citizens, those being Muslims and Slavs. Mucha was given the task to fill the upper part of the central exhibition space. He did this responsibly – undertaking many trips to the Balkans where he studied the region, the architecture, became acquainted with the people, cultures and customs. From this experience he completed an additional number of scene strips. In the main allegory Bosnia offers its fruits to the World Exhibition and others illustrating the arrival of the Slavs and the co-existence of Catholicism, Orthodoxy and Islam. The participation in the World Exhibition was a prestigious event for him and included the opportunity to create a work with grand conceptual content. Also there was the opportunity to represent the battle of suppressed people for freedom.

These two Czech natives significantly assisted in the modernization and in the approach of Sarajevo and Bosnia as a whole towards the West (the greatest credit going to Karel Pařík) but as well the approach of the West towards Bosnia and its cultures as Alfons Mucha did in his paintings.