When, in the 1990s Milošević decided to print a record amount of money which set the former Yugoslavia on the course of an inflation crisis, I had all the toys I needed. My toys became more interesting with each day. At the same time, prices increased enormously (more precisely „rampaged“) and paychecks were reduced to „zero.“ At that time, I played with money that was as valueless as their appearance. Every child had a bundle of money but not one of them was able to read out their protracted numbers.

I was six years old and we lived in Belgrade. In the neigborhood were a lot of children. In the summer we would sit in front of a building on the steps or in the courtyard and think up a new game. We needn’t worry about inflation and our entertainment was taken care of. Each of us had a bag full of money which had value just a few hours ago. The girls had purses full of bills and the boys had boxes which represented cash registers. We were happy kids because we had a ton of money and could build a house in grandma’s garden with it. None of us comprehended the reality of the money having no value.

It was a nice time – my favourite was a yellow bill with a girl with a kerchief on her head. It was ‚only‘ one-hundred-thousand but the bill was nice and was part of the series of bills from the inflation era. There were a number of them and their ‚value‘ grew so quickly that often there was the same picture with the same figure and only a zero was added and the color changed. I will never forget any of the bills that I played with. I still have them today and examine them in wonder. Today they merely have a numismatic value, not very large but I wouldn’t sell them for any price.

They had various colors and sizes. People often remember the one that had the largest figure – a pinkish bill with the face of the Serbian writer, Jovan Jovanovic Zmaj with a value of 500,000,000,000 dinars. Some people have complete collections and frequently sell them through the internet. They have greater value now after years than they had back then. 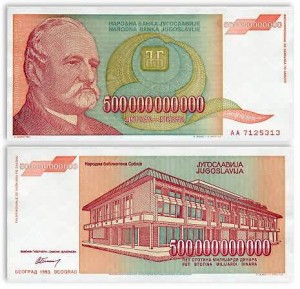 I, as a young girl, had all the inflation era bills. Today, I only have a few of them. I don’t remember when I brought them from Belgrade to Prague. Maybe they were stuffed among my toys which I brought with me when moving to Prague, or I brought them later. Every time I look at them I see this banal situation:

Playing with other children in front of our building and we have a ton of money. We always kept track of and guessed who was the best at reading the largest figures. We had so much of it that on all of those ‚Renaissance figures‘ and writers, we drew horns, beards, hats, moustaches, bowties, ties…. A moment later someone would come around and throw more of those bills at us which just minutes ago lost their value. There were more and more of them. I remember grandma passing by going shopping because she needed eggs. When she returned she had bought one egg for 10,000,000, threw a couple of bills to me and went home. We were all fascinated by the inflation. We were rich but no one comprehended it.

While we were happy little children of inflation our parents struggled. All production stopped because it wasn’t worth to produce – nearly a half of all workers were forced to take holiday. Supermarkets were pathetically empty and people could hardly read the prices in the mess of worthless bills with unbelievable numbers of zeros which grew daily. Even cafes and bars, which had always been a symbol of public life in Serbia, closed because they had no supplies and the prices were beyond the financial abilities of the population. The battle for bread had begun. Pay fell to an unimaginable 5 German Marks.

As an illustration of the economic and social crisis of the time, here are the prices of a few important staple products from 1993 and the real possibility of the population to buy them:

Can you even imagine that? : ) 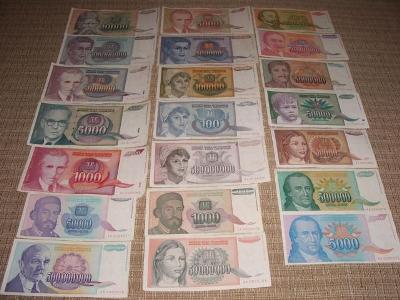 See in detail some of the bills in the GALLERY